Helmut Newton at Casa dei Tre Oci in Venice. Fascinating insights into the world of the great photographer of timeless elegance

Helmut Newton at Casa dei Tre Oci in Venice. Fascinating insights into the world of the great photographer of timeless elegance

200 photographs by Helmut Newton, never shown together during his lifetime, are currently on display at Casa dei Tre Oci on the island of Giudecca, facing St. Mark's Square across the Basin.

After a major restoration that brought it back to the original splendour of its Venetian style, the venue has become a center of photographic culture and excellence in photography both in Italy and abroad. Starting on April 7 until August 7, 2016, it will host the works of one of the most powerful and iconic fashion photographers of the twentieth century.

Helmut Newton’s photography influenced the visual culture of an epoch. He was the first to get fashion shoots out of the studio and into real world locations, the city, the streets, portraying beautiful, often completely unclothed, women. His erotically charged images were meant to evoke, provoke, and seduce, presenting a new woman, one that was way beyond the cultural models of the 1970s.

In addition to the photos, the exhibition also presents a video featuring a more private, playful Newton, a passionate artist who helped his models enter the photograph and transformed classically archetypal places (Cindy Crawford at Hotel de Paris in Montecarlo) into backdrops full of irony and, why not?, a touch of voyeurism. 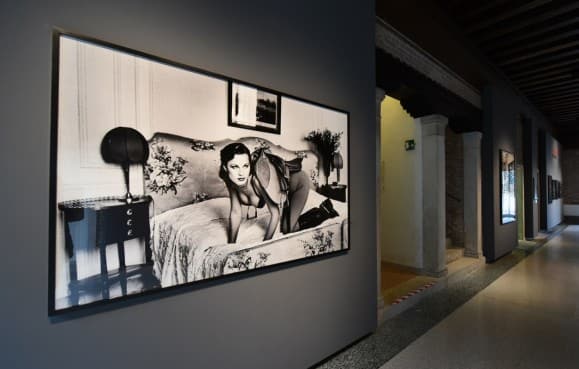